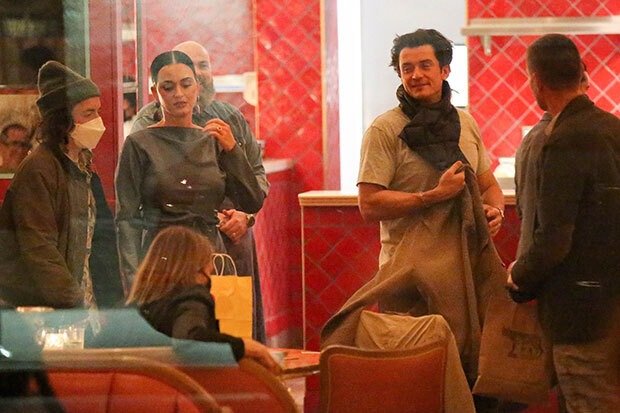 
Happy birthday, Orlando! His fiancée Katy Perry took him out to dinner at Mother Wolfe in Los Angeles for the special occasion.

Orlando Bloom is another year older. The Pirates of the Caribbean actor celebrated his 45th birthday on Thursday, January 13. The Capricorn was in good company for his birthday as he went out to dinner with his fiancée Katy Perry. They spent the evening at the restaurant Mother Wolfe in Los Angeles with some of their friends. Good times were had by all as the engaged couple was spotted settling into their seats beside their friends in the bright pink restaurant.

She also wrote a sweet message to him on his special day. “happiest 45th to the kindest, deepest, most soulful, sexy & strong man I know,” she wrote on Instagram. “thank you for being a constant compass, an unwavering anchor and bringing joi de vivre into every room you walk in. You are the love and light of my life. I thank my lucky stars for you and our darling dd.” She paired the post with a series of zany pictures of her husband-to-be. The first pic is an extreme close-up while the rest are adventurous snaps of him wearing military gear, exploring a crypt, in a small boat in England, arm-in-arm with her dressed up in a tux and many more. Based on this collage, it’s clear he and the “Teenage Dreams” singer have plenty of fun together.

The American Idol judge also left the birth boy a present in one of her other Instagram posts. That same day, Katy posted some thirst traps from backstage at her Las Vegas residency. She posed topless as she pushed herself up against a wall to cover her breasts by a sign that read “do not hose down.” She also showed off some of the sexy concerts she wears during her concert.

Orlando and Katy share a baby girl together named Daisy Dove Bloom. The “Roar” singer gave birth on August 27, 2020. The little one takes after both her mom and dad even at a young age. “She has kind of a combination of Orlando’s brows and my eyeballs but she now does all these like, big eyes… Everything is so new. It’s so beautiful,” Katy told Access Hollywood when Daisy was just a newborn.

Orlando also shares a kid with his ex-wife Miranda Kerr. Their 11-year-old son is named Flynn Bloom and even though his parents are no longer together, they put in their best effort to co-parent him and be a family unit with Katy. Miranda, in fact, is supportive of Orlando’s relationship with Katy and has even forged her own friendship with the singer.