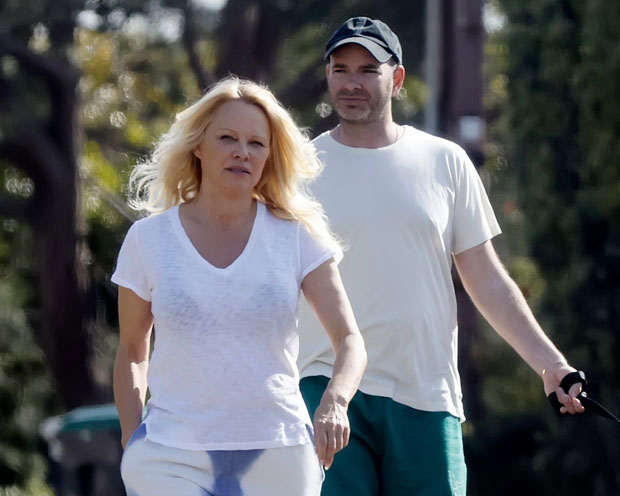 
Fresh off their first anniversary, Pamela Anderson and her handsome husband Dan Hayhurst were spotted in rare photos near her Malibu, California home.

Pamela Anderson, 54, and her husband Dan Hayhurst look so happy! The Baywatch icon and her bodyguard were seen out for a casual walk near her home in Malibu, California on Friday, Jan. 14. Pamela glowed in the sunny weather as she opted to go makeup free, leaving her famous blonde locks in a loose, natural curl. She stayed cozy in a pair of tie dye sweatpants and a v-neck white t-shirt with a blush velvet scrunchie around her wrist.

Meanwhile, Dan walked next to her with their adorable golden retriever on a leash. The British Columbia native rocked a green pair of shorts that appeared to read, “Swingers Club Classic,” along with a white scoop neck t-shirt and sneakers. He finished his ensemble with a plain black baseball cap. At one point, the laces on his sneakers appeared to become undone.

The low key outing comes just two weeks ahead of the Hulu series Pam & Tommy, which stars Lily James and  Sebastian Stan as her ex-husband Tommy Lee. The mini-series will document the couple’s whirlwind ’90s romance, which included getting married on a beach in Mexico after knowing each other for just four days. Pamela and Tommy went on to welcome two sons, Brandon Thomas Lee, 25, and Dylan Jagger Lee, 23, during their marriage, which came to an end in 1998. The series will specifically focus on their sex tape scandal, which was leaked in real life by Rand Gauthier (played by Seth Rogen).

After Tommy, Pamela wed Kid Rock in 2006, and Rick Solomon twice in 2007 and 2014, as well as Jon Peters for just 12 days in 2020 (the last union was not legal, however). The blonde bombshell seems to have found the love of her life with Dan, however, leading to a quick wedding in Dec. 2020 on her stunning Vancouver Island property.

“I’m exactly where I need to be—in the arms of a man who truly loves me,” she gushed to the Daily Mail after the nuptials. “This one year together has felt like seven — like dog years. I am in love,” she also said.