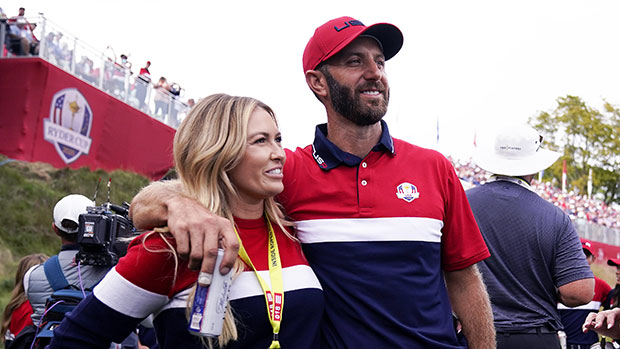 
Paulina Gretzky is “gonna get married” to Dustin Johnson, and she’s already sharing a sneak peek into the preparations for the big occasion! The 33-year-old model and daughter of NHL legend Wayne Gretzky, and the 37-year-old pro golfer are heavily hinting at a wedding in the open air, with Paulina posting Instagram stories of a flower-bedecked golf cart and an image of custom wedding cookies, complete with sugary likenesses of Paulina and Dustin’s faces, a champagne bottle, and a golf cart.

In one story post, Paulina is seen on a private jet sporting glittery cowboy boots and a white halter top, with what appears to be a white Birkin bag by her side. The photo’s caption reads, “She’s ready,” along with a white heart emoji. She also posted multiple stories of champagne glasses clinking on the jet, as well as a short video clip of Paulina exiting the jet, with a tiny hint of the classic wedding song “Going To The Chapel” playing.

Another story has Paulina and Dustin adorably walking and holding hands, and in yet another, Paulina shows a sweeping view of the leafy grounds where their wedding will take place. Paulina shared the stories throughout the day on April 13, as the wedding was clearly ramping up. Paulina also posted a photo of her in the makeup chair, as well as a couple of evening views of an expansive table decked out for a lavish wedding dinner. The wedding is reportedly taking place at the exclusive wedding venue Blackberry Farm outside of Nashville, according to People.

Paulina Gretzky — Photos Of The Model & Her Family

She’s teased the wedding on her social media in the months leading up to the actual wedding, as well. On March 1, she posted a bachelorette party photo in which she wears a white tube dress and cowboy hat, and her friends all surround her near a private jet wearing various shades of pink. A follow-up post on March 3 gave followers a closer look inside the private celebration, complete with yellow balloons and a fire dancer. “No Regretzkys,” she captioned the post.

Paulina and Dustin met in 2009 but weren’t an item until years later. The couple were engaged by 2013, so it’s been a long journey to the altar! In the interim, the couple gave birth to two sons, Tatum Gretzky Johnson, in January 2015 and River Jones Johnson in June 2017. In a May 2021 appearance on podcast Pillows and Beer, Paulina said she was never in a rush. “I fell in love with someone so fast and we had the best thing that ever happened to us, happen so quickly,” she explained. “The most important thing was my kids, Dustin and my career. Those things took precedent. Those things had to be established. So, after he won the Masters [in 2020], I said let’s do it, this makes sense.”