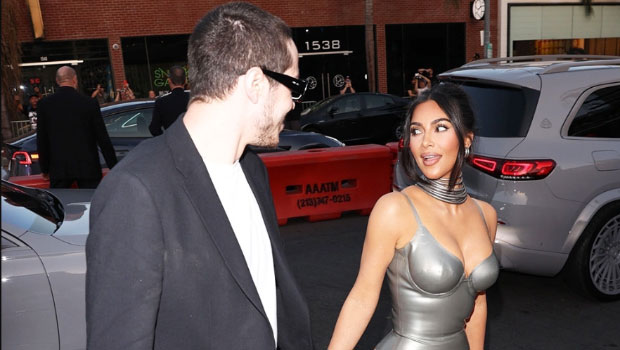 
Pete Davidson, 28, is feeling grateful to be in Washington D.C. this week with Kim Kardashian. The Saturday Night Live star was spotted by his 41-year-old girlfriend’s side at the Kennedy Center for the Mark Twain Prize for American Humor event on April 24 and is now “excited” to be joining her for the White House Correspondents’ dinner on April 30.

“Pete is so honored to be by her side this week and he is so proud of the work she has done and continues to do. He is in complete awe of her,” one source EXCLUSIVELY told Our Source.

“Pete is so excited for the White House Correspondents dinner and he can’t believe what an incredible opportunity this is,” a second source EXCLUSIVELY shared with us. “Pete knows there’s been a ton of chatter around him and Kim attending, so he’s ready for anything when it comes to being a target for jokes. He loves a good roast and he can’t wait to see what happens.”

This will be the first time the White House has hosted the highly-anticipated dinner in two years due to the COVID pandemic, so Pete, who has been dating Kim since Oct. 2021, isn’t the only one feeling excitement. In addition to him and Kim, comedian and television host Trevor Noah will be at the dinner and is set to roast President Joe Biden. Since Trevor recently made headlines for speaking out about Kim’s ex Kanye West, just as Pete did through a friend on social media, there is some speculation that he may mention the rapper’s feud with him and his ex-wife’s new beau during his roast routine.

“Pete wouldn’t be surprised if Trevor brought up the fact that they’ve both been in similar situations when it comes to Kanye and all the drama on social media,” the second source explained. “He’s really honored just to be invited to attend and as long as he’s respectful to Kim then no matter what Trevor dishes out, he’s ready to take it.”

Kaley Cuoco’s Husbands: Everything To Know About Her 2 Spouses & Their Marriages

This will be Kim’s second time attending a White House Correspondents’ dinner. She last attended the one in 2012, when President Barack Obama was in office.