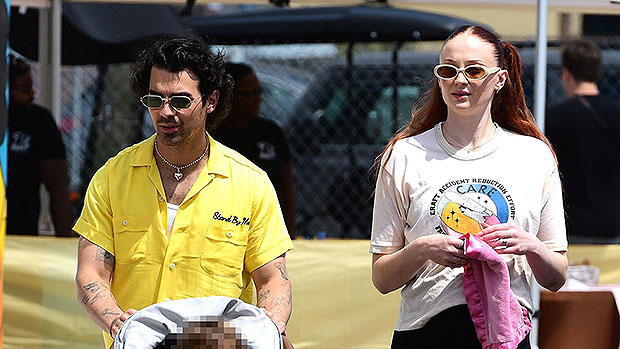 
Sophie Turner and Joe Jonas are clearly head over heels for their baby girl Willa! The couple looked every inch the doting parents as they stepped out with their one-year-old daughter in Los Angeles on Saturday (April 23). The 25-year-old actress, who is pregnant with the couple’s second child, cradled Willa in her arms as she walked alongside her pop star husband, 32, during the sunny afternoon outing.

The X-Men: Dark Phoenix alum rocked a casual ensemble, as she donned a graphic tee and black leggings. She kept a low profile with a pair of dark sunglasses and capped off the look with a set of white sliders. Willa looked cute as a button in a tiny floral jumper as she munched on some snacks from the outdoor food hall. And Joe sported a bright yellow bowler shirt, dark pants and black Adidas sneakers.

Back in July 2020, Sophie and Joe welcomed Willa. The Game of Thrones actress and the “Sucker” singer confirmed their happy news in a statement shared with Our Source: “Sophie Turner and Joe Jonas are delighted to announce the birth of their baby.” The arrival of their baby girl came almost a year after they held a lavish wedding in France. They adorable couple initially tied the knot on May 1, 2019 in a Las Vegas ceremony, which came as a surprise to both friends and fans!

Meanwhile, Willa’s uncle and aunt, Nick Jonas, 29, and Priyanka Chopra, 39, recently celebrated the birth of their own little bundle of joy. The gorgeous couple confirmed on January 21 that they had welcomed their first child. “We are overjoyed to confirm that we have welcomed a baby via surrogate,” the couple’s official statement read. “We respectfully ask for your privacy during this special time as we focus on our family. Thank you so much.” The baby’s full name, which was revealed in April, is Malti Marie Chopra Jones and she was born on Jan. 15 at 8pm at a hospital in San Diego, California.