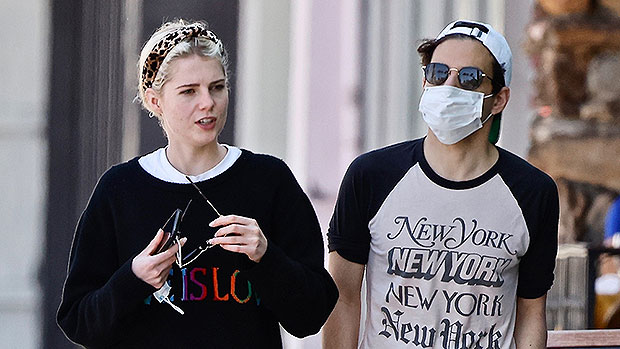 
Rami Malek, 40, and Lucy Boynton, 28, looked like the perfect couple during their latest day in Los Angeles, CA. The actor and his blonde girlfriend were seen walking outside in the Studio City area while running errands together on Saturday. They were both dressed casually during the photographed moments and shared several smiles as they talked to each other throughout the outing.

Rami wore a black and tan baseball-style shirt that had the city name “New York” printed several times in all different text styles on the front along with tan shorts, black socks, and gray sneakers. He also wore a backwards white baseball cap, sunglasses, and a white face mask as he walked with his hands in his pockets some of the time.

Lucy went with a black sweatshirt that had multi-colored letters on the front over a white tee and black leggings. She also wore black and white striped socks, black sneakers, and a leopard print headband over her head as her hair was in a low bun. Like her beau, she topped the look off with sunglasses.

The lovebirds were spotted getting cozy with each other at one point during their stroll, and Rami had his hand on Lucy’s shoulder while leaning in and talking to her. Despite not being seen together on a regular basis, the couple definitely seem like they’re as strong as ever.

Before they were seen running errands in L.A., Rami and Lucy have showed up to numerous red carpet events together. They met while filming Bohemian Rhapsody in 2017 when Rami played the iconic role of Queen’s lead singer Freddie Mercury and Lucy played his former love interest Mary Austin. They stayed private about their relationship until the 2019 Academy Awards, where Rami won an award in the Best Actor category and kissed Lucy before getting up on stage to accept it.