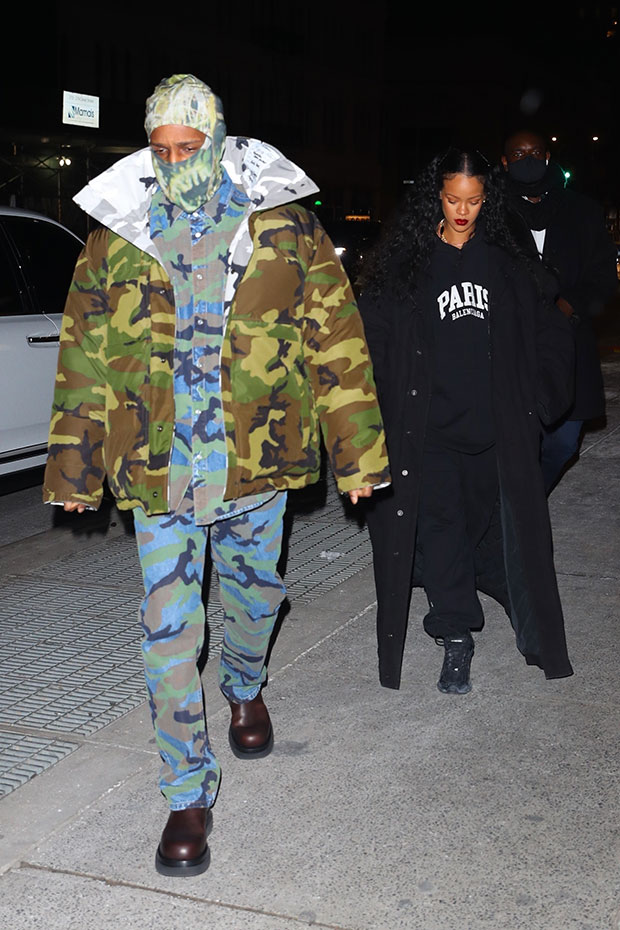 
Rihanna and A$AP Rocky braved the cool east coast weather as they stepped out for dinner in New York City on Jan. 21.

Rihanna, 33, and A$AP Rocky, 33, were spotted heading out for a night in New York City. The Savage X Fenty designer and “Problems” rapper were bundled up for the chilly 20 degree weather on Friday, January 21. Rihanna opted for a black Balenciaga logo sweater that read “Paris,” along with matching oversized sweatpants and a black coat.

The fashion maven added a pair of black sneakers to finish her sporty look, which she offset with glam makeup. The Fenty Beauty founder channeled the ’50s with a bright red lip, along with two pig tails framing both side of her face. She walked behind her beau as they headed into a destination, surrounded by masked security guards.

A$AP Rocky, née Rakim Mayers, rocked a blue and green camo outfit with a all green camo jacket overtop. He kept the patterned theme going with a tie dye balaclava over his face, finishing the outfit with brown leather boots.

Rihanna and A$AP are regularly spotted in the Big Apple, which is Rocky’s hometown. Recently, however, the “Umbrella” singer took her beau to her native of Barbados for the holidays! The couple were spotted leaving a swanky New Year’s Eve party to ring in 2022, with RiRi looking sexier than ever in a one shouldered black dress by Oseree and open toe sandals. Notably, the rapper was also spotted around Christmas 2020 in Barbados, where he seemingly spent time with her family.

Last year, sources told Entrendz Showbizz EXCLUSIVELY that the couple seemed more in love than ever during Miami’s Rolling Loud music festival. “They looked very happy and in love and seemed to want to keep a low profile and not be seen together,” an eyewitness who spotted them sharing a kiss at the 1 Hotel Residences spilled. She “immediately fell into his arms for a hug and kiss,” they added, noting that she was “smiling” under her mask as she got into an elevator with her beau. She was later spotted supporting A$AP at the music festival.