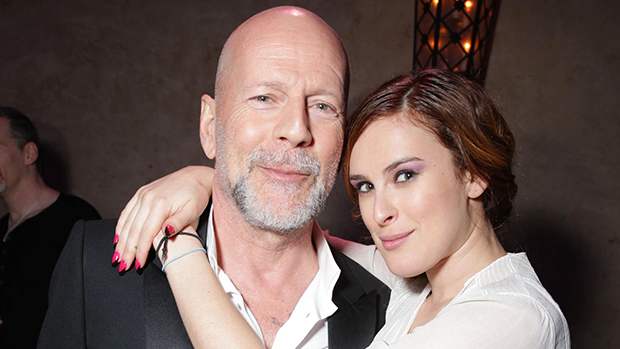 
Rumer Willis, 33, is remembering special moments with her father Bruce Willis, 67, amid his new health struggles. The Empire actress looked back at the past fondly, sharing a vintage photo of her and dad on Instagram Thursday, Apr. 22.

Rumer and Bruce looked so cute in the very 90s snapshot, which she captioned just, “P A P A.” In the photo, the Die Hard star wore a red baseball hat and white sweatshirt as he wrapped his arms around his eldest daughter, who looked to be about four or five. Bruce closed his eyes and planted a kiss on his little girl’s forehead sweetly while Rumer hugged her daddy close.

Rumer was reminiscing weeks after the Willis family announced that Bruce was “stepping away from the career that has meant so much to him” because he had been diagnosed with aphasia, a condition that affects one’s cognitive abilities. The Mar. 30th statement came from the actor’s entire family, including ex Demi Moore, 59, adults daughters Rumer, Scout, and Tallulah Willis, now-wife Emma Hemming Willis, 43, and their two girls, Maybel and Evelyn.

In the message, they went on to tell fans, “This is a really challenging time for our family and we are so appreciative of your continued love, compassion, and support. We are moving through this as a strong family unit, and wanted to bring his fans in because we know how much he means to you, as you do to him. As Bruce always says, ‘Live it up’ and together we plan to do just that.”

Aphasia is a language disorder, which affects a person’s ability to communicate. The disease is apparently caused by brain damage, which causes victims to lose the ability to express and understand speech. Bruce’s family did not specify his symptoms or when he was diagnosed in their statement.