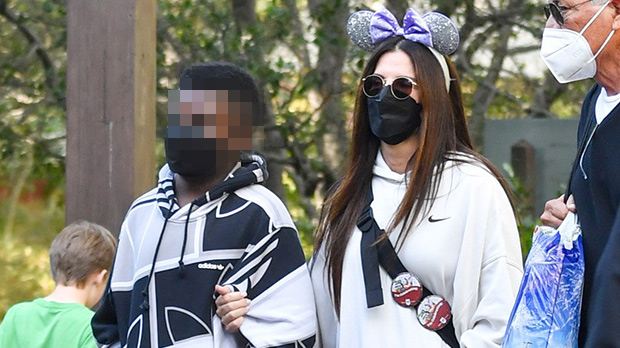 
Family fun day! Sandra Bullock proved she is the ultimate doting mom by treating her two adorable kids to Disneyland! In a rare public outing on May 12, the Oscar winner, 57, was spotted with her son Louis, 12, and daughter Laila, 10, at the “happiest place on Earth.” Sandra made sure the family hit all the best rides, got the good Mickey gear and stopped for some delicious desserts during the sunny trip to the theme park.

Rocking a pair of fuzzy Minnie Mouse ears, The Lost City star looked incredible in her casual ensemble featuring an oversized white hoodie, black leggings and a set of fresh sneakers. Sandra left her trademark chestnut tresses long and loose, as she set off the low-key look with sunglasses and a messenger bag. Walking alongside their mom, Louis donned a graphic sweatshirt while Laila was perfectly dressed for the occasion in a tie-dye Micky outfit!

While Sandra is quite private when it comes to family time with the kids, she certainly loves to gush about them in interviews! During a chat with Parenting, Sandra revealed that “something told [her]” to adopt Louis in 2010 after “Hurricane Katrina happened in New Orleans” and she’s been smitten ever since. She also shared how he makes her laugh, telling People about a hilarious moment it happened when she was tucking him to bed. “[I] told [Louis] that even when I’m old and gray and more wrinkly than I am now, I’ll still love him and want to tuck him in,” she explained. “And he asked why I have wrinkles, and I said, ‘Well, I hope some of them are from laughing so much.’ And he touched my face and said, ‘You’re not old, you’re just happy.’”

Sandra Bullock Through The Years: Photos Of The ‘Miss Congeniality’ Actress

As for Laila, Sandra revealed her daughter, whom she adopted in 2015, has quite the strong personality. “Laila is just unafraid. She’s a fighter, and that’s the reason she’s here today,” the star explained to InStyle in 2018. “She fought to keep her spirit intact. Oh my God, what she is going to accomplish. She’s going to bring some real change.”

Everything We Know About ‘The Lost City’