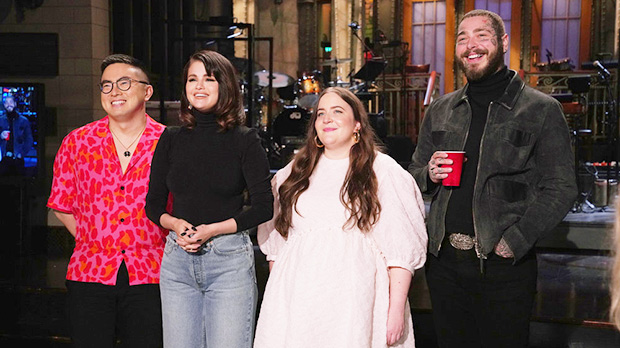 
Selena Gomez, 29, got all glammed on May 12 up to rehearse her Saturday Night Live hosting debut. The multi-talented star showed off her gorgeous glam and stylish outfit in a dressing room at New York City’s Studio 8H in a video from her Instagram Stories that was also shared by celebrity manicurist Tom Bachik. Selena took several selfie videos to show just how beautiful she’s looking before she hosts the iconic sketch series for the first time ever with musical guest Post Malone this coming weekend.

Selena donned a full face of makeup, including black eyeshadow and light pink lipstick, in the rehearsal selfies. The ends of her brunette hair was curled by celebrity hairstylist Orlando Pita. She also rocked freshly-manicured black nails, courtesy of Tom. As for her outfit choice, Selena wore a black turtleneck top and a pair of denim jeans. She finished off her look with a pair of silver hoop earrings and black heels.

The “Lose You To Love Me” hitmaker was in that same full glam and chic outfit for her SNL teaser, which was shared on Twitter. Selena stood with Post Malone, Aidy Bryant, and Bowen Yang and introduced herself, as Aidy referred to Selena and Post as “two pop stars.” The Only Murders in the Building star then clarified that she’s “also an actor,” while Post hilariously responded, “I’m not really a pop star.”

In the latter half of the teaser, Bowen asked if she’s “nervous” or has “ants in her pants” ahead of her hosting debut. “No, I’m just excited,” the Texas native confidently said. Post, Bowen, and Aidy then jokingly taunted Selena and said there LITERALLY might be ants in her pants, which garnered some epic facial reactions from the Disney Channel alum.

Fans are so excited to see Selena host SNL. From her highly-anticipated monologue, to the creative sketches, there’s no doubt she’s going to crush it all night long!

Gunna: 5 Things To Know About Rapper Making His Debut on ‘SNL’