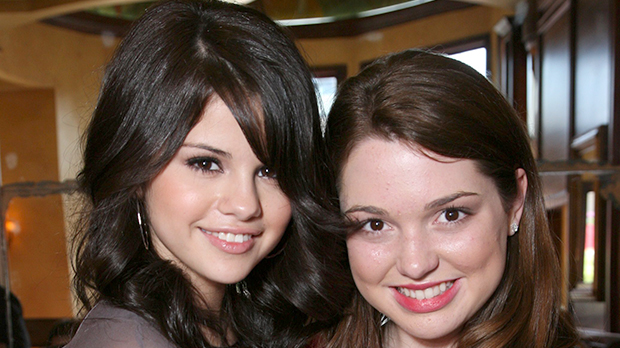 
Selena Gomez reunited with her former Wizards of Waverly Place co-star, Jennifer Stone, for an epic new TikTok. The duo recreated their iconic “Crazy Hat” song from the Disney Channel series in the clip, which Selena, 29, shared on April 23. “What’s that? A hat? Crazy, funky, junky hat,” the pair lip synched, while dancing along side-by-side. “Overslept, hair unsightly. Trying to look like Keira Knightley. We’ve been there, we’ve done that. We see right through your funky hat.”

Selena was dressed in a grey sweatshirt and matching sweatpants for the nostalgic performance, while Jennifer, 29, rocked a Led Zeppelin T-shirt and jeans. Both actresses also enjoyed alcohol during their reunion: Selena had a White Claw seltzer in her hand, while Jennifer held a glass of red wine.

“We had to,” Selena wrote over the epic video. Selena played Alex Russo, while Jennifer played her on-screen BFF, Harper Finkle, in Wizards of Waverly Place. The series ran from October 2007 to January 2012 and also starred David Henrie as Justin Russo, Jake T. Austin as Max Russo, Maria Canals-Barrera as Theresa Russo, and David DeLuise as Jerry Russo.

In an EXCLUSIVE interview with Our Source in 2020, David, 32, revealed his idea for a Wizards of Waverly Place reboot. “I think you’d start them [Russo family] in a place where everyone is divided, doing their own thing in the wizard world,” he said. “Justin is headmaster at WizTech, busy with that, has his own family now, not concerned with his parents or his siblings. Alex is a fashionista, hasn’t seen the family in forever. Max is like a sub shop conglomerate billionaire who turned the sub shop into a million things.”