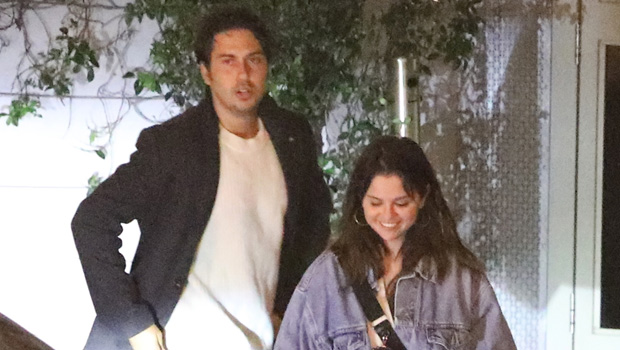 
Eight years after starring in Behaving Badly together, Selena Gomez and Nat Wolff reunited for dinner at the Sunset Tower Hotel on July 4. Selena was all smiles as she left the celeb hotspot with her longtime pal. She looked comfortable, but stylish, wearing a pair of white pants and a denim jacket. She wore minimal makeup and a cross body bag for the night out.

Even though the night out had some fans buzzing, this appears to be just a platonic hangout. Nat started dating Grace Van Patten in 2017, and there have been no reports of a breakup. Meanwhile, Selena has opened up quite a bit recently about her single status.

In addition to posting various TikToks about how “single” she is, Selena also referenced her lack of a significant other while hosting Saturday Night Live in May. “One reason I’m excited to host SNL is that I’m single,” she said in her opening monologue. “And I heard SNL is a great place to find romance.”

She referenced how Emma Stone and Scarlett Johansson both met their significant others on the show. Of course, Kim Kardashian also met her new man, Pete Davidson, during her time hosting SNL. However, Selena opted to joke about Pete’s close friendship with Machine Gun Kelly, rather than his hot and heavy romance with Kim, in the monologue.

After very high profile romances with Justin Bieber and The Weeknd, as well as a kidney transplant and battle with Lupus, Selena has spent the last several years focusing on herself, rather than dating. She has not publicly dated anyone since her final split from Justin in 2018, which happened just weeks before he reunited with his now-wife, Hailey Bieber. However, based on all her talk about being single lately, it looks like she’s ready to jump back in the dating pool and find someone special!