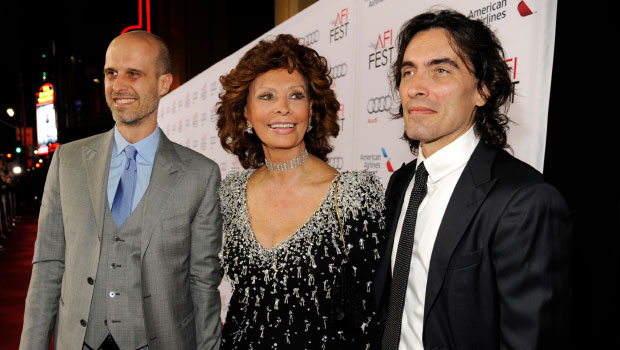 
Sophia Loren is one of the most iconic actresses of all time with a career spanning from the 1950s to now. Born in Italy, her roles include both Italian and American productions. In 1961, she and the film Two Women made history when she became the first person to receive an Academy Award for a role that was not spoken in English.

The Golden Globe and Grammy winner has enjoyed a fruitful life both on and off the screen, as she is the mother of two sons. Sophia had her kids during some of the busiest times of her career. After tying the knot with Italian film producer Carlo Ponti in 1966, she welcomed son Carlo Ponti, Jr. in 1968, and son Edoardo Ponti in 1973. Both of her sons have grown up to be successful creatives in their own right, although did not amass the same level of notoriety as their mother. See below to learn about the lives of Sophia’s two boys, Carlo and Edoardo!

Carlo is an internationally acclaimed conductor. In the 1990s, he worked in the Conductor’s Institute in Connecticut, studied under some of the biggest names in Los Angeles, and relocated to Austria to study at the Vienna Music Academy, according to his website. He has also led some of the world’s largest orchestras, including the Russian National Orchestra, for which he served as an associate conductor between 2000 and 2018, and headed California’s San Bernardino Symphony for just over a decade. He also founded the Los Angeles Virtuosi Orchestra in 2013. The orchestra’s mission is to “serve as a catalyst in supporting music education through collaborative partnerships with the community, schools, agencies, and other arts organizations, and by allocating 100% of net income from performances to support and develop the study of music,” according to its website.

“[Classical music] teaches them how to live, to be organized, how to have a community, how to be unified,” Ponti told NPR of his students in 2009. “Things that young people in this day and age really need.” Carlo also holds an impressive collection of high-ranking musical awards to his name.

While his personal life is quite private, it is known that he made his talented mother a grandmother, as he welcomed two kids with his wife, Andrea Meszaros Ponti, whom he married in 2004.

Edoardo followed a similar career path to his parents, choosing to become a director. It also seems that his brother’s affinity for music helped him visualize his future career. “When I was 4, my brother who is four years older would practice piano in the living room,” he recalled to the University of Southern California’s Dornsife Magazine. He earned two degrees from the school: a bachelor’s and master’s degree in cinema and English literature, according to his LinkedIn page. “I remember very specifically. I was next to him playing with my cars and little toy ships using his music as the musical score to my scenes. When he played a dramatic piece, I would use that to have my ships sink; when he practiced something more high octane, I switched to a car chase.”

Edoardo has seven directing credits on his IMDb page, including 2002’s Between Strangers and 2011’s Coming & Going. He also teamed up with his mom for 2020’s The Life Ahead. In addition, he has a few acting credits, has produced several plays, and even directed an opera. Some of his work has been honored at the world’s most elite film festivals, including Cannes, Toronto, Tribeca, and Venice.

He previously gave insight into what it was like growing up as the son of one of the world’s top actresses. “Obviously, I was always aware that my mother was who she was, just because of the attention that she got, but the truth is, that attention, that side of her, is not who she really is,” he told TCM in 2016 (via northjersey.com). “Many actors, many actresses, when they hit the level of fame that she has, that fame becomes their identity, because it feeds their ego. With my mother, that was never the case … What always fed her life force was her family. … We were never overshadowed as a family or as children by her accomplishments. We always were made to feel like we were her best accomplishments.”

Edoardo also made Sophia a grandmother. He married actress Sasha Alexander in 2007 and they share two kids: Lucia and Leonardo.