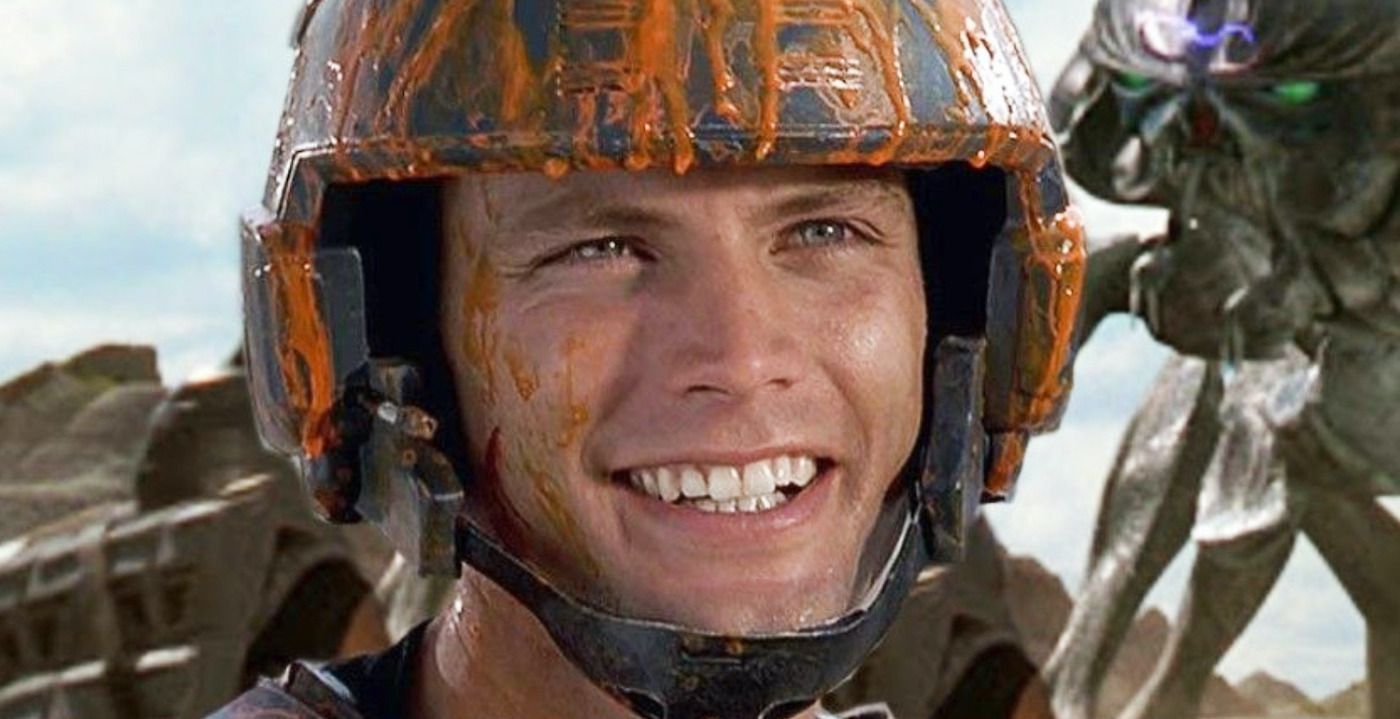 The cold hard truth of Starship Troopers, Paul Verhoeven‘s 1997 follow-up to his infamous 1995 Showgirls, is painfully obvious from the start: this is not Oscar bait. The acting is wooden, especially from lead actor Casper Van Dien. Denise Richards‘ performance is also suspect, playing aspiring pilot Carmen Ibanez. The only actors that stand out are the steady veterans Clancy Brown and Michael Ironside. What Starship Troopers is, though, is satire at its best, with Verhoeven masterfully weaving social commentary and potshots throughout the film.

The plot itself is relatively straight-forward. Troopers is set in a future where Earth is united under a fascist military organization called the “Federation”. The people of Earth are split into two groups: Citizens, who are people that have joined the Federal Service, and Civilians, who have not. Citizens are able to vote in Federation elections, run for public office, pay low or no tuition fees for college, and are given permission to have more than two children. Civilians do not have the right to vote, do not have access to free education, and requests to bear children are more difficult to obtain. In this world we are introduced to Johnny Rico, a high school student who is graduating along with his girlfriend Carmen Ibanez, Dizzy Flores (Dina Meyer), a friend who wants to be his girlfriend, and psychic friend Carl Jenkins (Neil Patrick Harris). Carmen decides that she is going to join the military in order to become a class citizen. Johnny joins as well, against the wishes of his wealthy civilian parents. After days of military training, Johnny realizes he didn’t join for the right reasons, but as he prepares to quit, news comes that an asteroid from the planet Klendathu hits his hometown of Buenos Aires, killing his family alongside millions of others.

RELATED: The 27 Best Action Movies of the 90s

Back in the game, Johnny and his fellow troopers head to Klendathu to destroy the villainous inhabitants: large, deadly space bugs they’ve labeled Arachnids. They realize too late that they have been lured to the planet and suffer tremendous losses as a result. Johnny is severely injured in the attack and mistakenly listed as “Killed In Action”, leading Carmen to believe he is dead. Recovering from his injuries, Johnny is assigned to the Roughnecks, a special unit of Mobile Infantry. The Roughnecks cause severe losses for the Arachnid forces, but eventually are forced to retreat after an ambush. On a military starship, Johnny is promoted to Lieutenant and given command of the Roughnecks, who are sent back to the planet to search for ‘brain bugs’, large and intelligent bugs that control the Arachnid behaviors. The Roughnecks investigate a series of caves in their pursuit, leading Johnny and a pair of soldiers to a large, underground area where a brain bug is about to suck the brains out of Carmen, who crashed into the area with her now-deceased (and brainless) co-pilot. The soldiers flee while an injured soldier, Sugar Watkins (Seth Gilliam) stays behind to set off a nuclear warhead. They arrive on the surface to find that the brain bug has been captured by the Mobile Infantry, giving the forces of Earth a chance to learn how the bugs think and turn the tide of war in their favor.


Starship Troopers is almost two different movies, where the first half follows a group of high school graduates on the next steps of their journey, and the second half is unapologetic, full-on action from start to finish, bolstered by incredible, imaginative special effects (fun fact: Starship Troopers was nominated for ‘Best Visual Effects’ at the 1997 Academy Awards, but lost to the special effects-laden powerhouse Titanic). It also pays homage, intentional or not, to predecessors Star Wars and Aliens. The sheer number of veterans in the film that have lost appendages to the bugs is, first and foremost, a telling sign of the importance of military and military technology over state-of-the-art artificial limbs, but brought to mind the incessant lopping off of hands throughout the Star Wars films. The nod to Aliens is more obvious, with a cocky military unit overwhelmed by creatures smarter than anticipated, creatures that bow to their leaders, the brain bug and the alien Queen respectively. In fact, the film made me think immediately of a quote from Hudson (Bill Paxton) in Aliens: “Is this going to be a standup fight, sir, or another bug hunt?” A few tweaks here and there would make it conceivable they exist in the same universe, with the ‘bug hunt’ a literal reference to the Arachnids.


As good as the effects are, the real strength of the film is, as mentioned above, its satire. Like his RoboCop, Verhoeven uses television clips and fake advertisements to take shots at society. But where RoboCop uses these moments to skewer Cold War politics and the American automotive industry, the ones in Troopers are more pointed. They are satirical extremes of military propaganda, showing happy citizens (not civilians), shots of children joyfully holding guns, all while pushing for enrollment into Federal Service. The ads dovetail into the depiction of a Nazi-like regime that is embraced and is working. The allusion to Nazism is so prevalent and over the top – from costuming to the use of a Nazi Eagle like symbol – that it clearly is satire to show the dangers of extremist policies, which somehow blew right past the critics of the day. Militarism is another victim of Verhoeven’s critical eye. There is no plan for the Federation forces. They are told to go in and kill anything with more than two legs, and when that invariably goes sideways they simply bring in more soldiers. The graphic scenes of the dead are an unwavering display of the horrors of war, a visual representation of the dangers of unchecked policy. The real kicker comes at the end. Where other films would have the main characters learn about the dark side of their leadership, even opting to fight against it, Starship Troopers‘ protagonists instead become part of the system, a vicious circle where they are now the stars in the propaganda.


For what seems to be an action-packed popcorn flick, Starship Troopers sets its sights high, and what it speaks to is even more relevant – almost frighteningly more relevant – today.