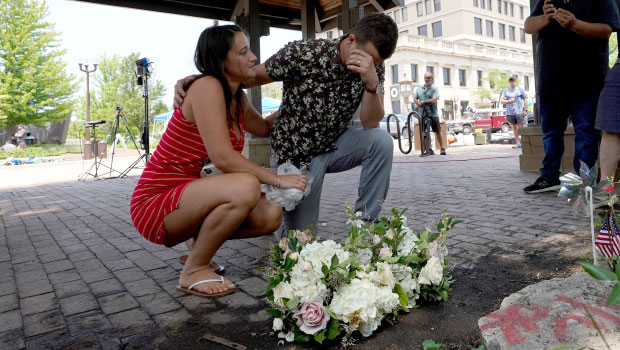 Two-year-old Aiden McCarthy has been left orphaned following the mass shooting at a Fourth of July parade in Highland Park, Illinois. Both his parents, Kevin McCarthy, 37, and Irina McCarthy, 35, were shot and killed alongside five other parade watchers that day, per The Washington Times. Aiden was protected by strangers following the horrific tragedy and was reunited with family members the following day after his image was shared on social media with a plea for information regarding the boy’s relatives. Aiden is now under the care of his grandparents and a GoFundMe has been set up for him.

“Aiden will be cared for by his loving family and he will have a long road ahead to heal, find stability, and ultimately navigate life as an orphan,” the GoFundMe page, led by a relative of Irina McCarthy, reads. “He is surrounded by a community of friends and extended family that will embrace him with love, and any means available to ensure he has everything he needs as he grows.” The administrator concluded, “On behalf of his family, and with their permission, I am establishing this fundraiser to support him and the caregivers who will be tasked with raising, caring for, and supporting Aiden as he and his support system embark on this unexpected journey.” As of this writing, the GoFundMe page has raised nearly $1 million, surpassing its $500,000 goal.

Suspect Robert “Bobby” E. Crimo III was arrested hours after the attack, per CNN, and has been charged with seven counts of first-degree murder. More charges are expected to follow. Law enforcement believes it was a premeditated attack. “Based on where we’re at, at this point of the investigation — and some of this is preliminary so is subject to change as we keep moving forward — but we do believe Crimo pre-planned this attack for several weeks,” Lake County Sheriff’s Office Deputy Chief Christopher Covelli told the press.

Following the massacre, House of Cards actress Rachel Brosnahan, who was raised in Highland Park, spoke out about the celebration-turned-deadly event. “I grew up in Highland Park and this parade is a highlight of the year for so many families. I’m sick to my stomach every time news like this comes out, but I don’t wish the pit in your stomach as you call your family and friends to make sure everyone is okay on anyone. No words,” she tweeted. “My heart is broken for the families in Highland Park affected by today’s shooting.” She then advocated for people to help “end gun violence.” Several others shared their disappointment with history continuously repeating itself in America. For instance, Mark Hamil, who played Luke Skywalker in the iconic Star Wars franchise, tweeted “again” dozens of times in a row to get his point across.

In May, the deadliest school shooting since 2012’s Sandy Hook occurred in Uvalde, Tex. at Robb Elementary, which left 19 kids and two teachers dead. Following that slaughter, Matthew McConaughey stepped up and condemned gun violence, as he was born and raised in Uvalde. “The true call to action now is for every American to take a longer and deeper look in the mirror and ask ourselves, ‘What is it that we truly value? How do we repair the problem? What small sacrifices can we individually take today to preserve a healthier and safer nation, state and neighborhood tomorrow?’ We cannot exhale once again, make excuses and accept these tragic realities as the status quo,” he passionately wrote online.

David Harbour’s Weight Loss: What The ‘Stranger Things’ Star Has Said About His Body Transformation