HomeHollywoodYoung Thug: 5 Things To Know About The Rapper Arrested On Racketeering...
Hollywood 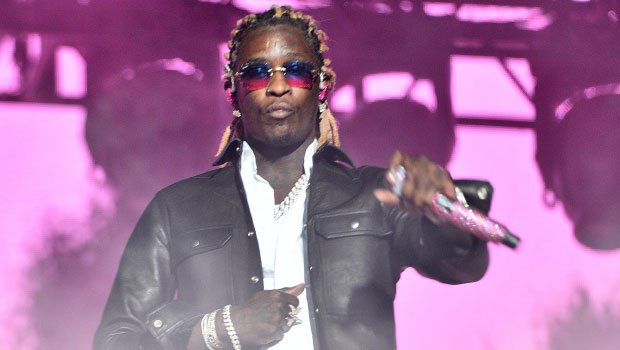 
Young Thug, 30, is facing multiple charges after reportedly being arrested on May 9. The rapper is being charged with participation in street gang activity and conspiring to violate the Racketeer Influenced and Corrupt Organizations (RICO) Act, according to online jail records obtained by Pitchfork. After his arrest, he was reportedly booked in the Fulton County Jail.

His arrest was the result of 56-count grand jury indictment that included 28 members and associates of his label and imprint YSL, according to WSB-TV reporter Michael Seiden. Fellow rapper Gunna was also reportedly named in the indictment and faces one count of conspiring to violate RICO.

Find out more about Young Thug and his life in the music scene below.

Young Thug broke through the hip hop music scene in 2014.

He released the singles “Stoner” and “Danny Glover” after he signed with Gucci Mane‘s 1017 Records and released a debut mixtape in 2013. He also appeared on several other singles, including T.I.‘s “About the Money”, Tyga‘s “Hookah”, and Rich Gang‘s “Lifestyle” and released other mixtapes over the years. His debut studio album, So Much Fun, was eventually released in 2019.

He has won many prestigious awards for his music.

The talented star is the owner of several American Music Awards as well as an MTV Video Music Award and several UK Music Video Awards. He also won a Grammy Award for his song with Childish Gambino called “This is America.”

He fathered his kids with four different women. Coming from a large family himself (he’s one of 11 children), the dad talked about the struggles of fatherhood in an interview with GQ. “They ain’t easy. It be like, ‘If I could take this back? Yes, what the f*ck was I thinking!’” he told the outlet in 2016.

“…It’s not even taking care of the kids,” he continued. “The main part is you won’t be able to do what you always did. That’s the number one rule to having a kid: You can’t be who you were.”

He has been involved in philanthropy work.

Young Thug, whose real name is Jeffery Lamar Williams, joined the #fightforpoverty campaign in in Dec. 2016 and once in 2017, he donated all his sold out concert’s proceeds to Planned Parenthood. “I was a teenage parent. Planned+unplanned parenthood is beautiful,” he wrote about the donation on Twitter.

The mother of one of his children was tragically killed.

LaKevia Jackson, with whom Young Thug shared a 14-year-old son, was shot and killed at the age of 31 over a reported bowling ball dispute at the Metro Fun Center in Southwest Atlanta in March 2022. Young Thug and the late mother met and dated in Atlanta before he became famous for his rap career, according to LeKevia’s mother.