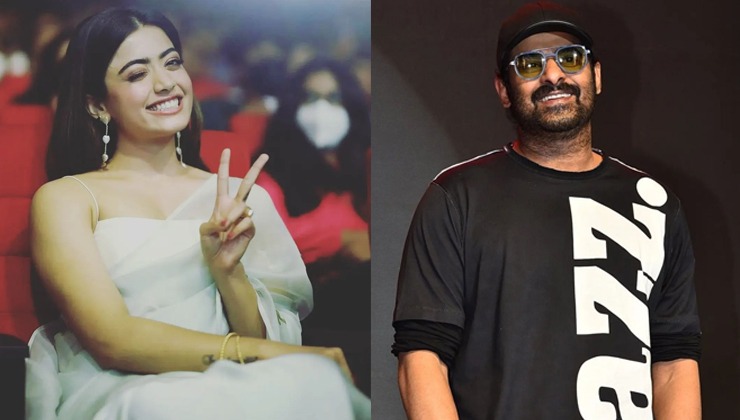 Sita Ramam starring Dulquer Salmaan, Mrunal Thakur, and Rashmika Mandanna is releasing tomorrow i.e on August 5. Ahead of its release, the makers hosted a pre-release event on Wednesday in Hyderabad. Prabhas was the chief guest of the event. The pics and videos from the grand event have gone viral on social media. The Baahubali actor was all praise for the film and also showered compliments on Dulquer, Rashmika and director Hanu Raghavapudi. He also called the Dear Comrade actress ‘most wanted Heroine‘ . Prabhas also asked everyone to watch Sita Ramam in theaters.

He said, “Some films are meant to be watched in theatres. I saw the trailer and visuals of Sita Ramam. The makers went to Russia and Kashmir to shoot the film. This is a film that should be watched in theatres. The budget which the producers spent and the scale is huge. For example, do we stop going to the temple because there’s a pooja room at home? For people in the cinema, theatres are our temples. It’s because of you. We should watch Sita Ramam in theatres.”

The Radhe Shyam actor added, “We have Rashmika, who’s the most wanted heroine. We have a huge star cast too. We should watch it in theatres.”

Here are some pics from Sita Ramam pre-release event.

Dulquer thanked Prabhas for attending the event and revealed that he had chance to peep into the sets of Project K and he guarantees that the film is going to change Indian cinema.

Rashmika Mandanna is currently one of the most popular actors. She was last seen in Allu Arjun starrer Pushpa. The diva is all set to make her debut in Bollywood. She has Good Bye with Amitabh Bachchan and Mission Majnu with Sidharth Malhotra. Rashmika is also sharing the screen space with Ranbir Kapoor in Sandeep Reddy Vanga’s Animal. While Prabhas has Adipurush, Salaar and Project K in his kitty.