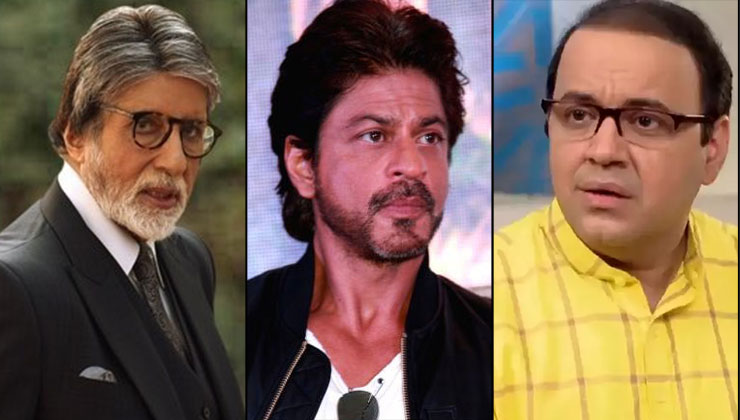 Apart from trolling, online bashing and online hatred, death rumours or death hoaxes of stars have become quite common in media or social media. Well, spreading rumours about someone’s death is anyway the most insensitive thing anyone will ever come across. However, these death rumours of actors haven’t stopped coming out as it was recently reported that Taarak Mehta Ka Ooltah Chashmah star Mandar Chandwadkar passed away. The actor then took to his Instagram account and dropped a video mentioning that these are false rumours and one should not pay any heed to such news.
- Advertisement -

Having said that, Mandar aka Bhide is not the only one who has fallen prey to the death hoaxes before. Actors like Amitabh Bachchan, Shweta Tiwari, Lucky Ali, Shah Rukh Khan, Divyanka Tripathi, Paresh Rawal, Mukesh Khanna, Kirron Kher and many more have been a part of death rumours.

Speaking about the same, take a look at the actors whose death rumours took the internet by storm:

1. Amitabh Bachchan: In June 2012, news declaring Amitabh Bachchan’s death spread like a wildfire. The fake news stated that he met with an accident and died in a single-vehicle crash on Route 80 between Morristown and Roswell. However, the rumours were put to an end when Big B himself denied the reports.

2. Shah Rukh Khan: Back in 2017, someone spread a death hoax of SRK getting killed in a plane crash. However, adding a little wit, Khan took a classic dig at all the death rumours and dropped a selfie with the caption, “TGIF! Survived the week inspite of a plane crash, fatal accident on sets & yet another title of Imtiaz Ali film!” It was hilarious.

3. Shweta Tiwari: The Kasautii Zindagii Kay star was in the news for the same and fans were highly shocked. However, her estranged husband Abhinav Kohli clarified that she is doing well and is spending time with their kids.

4. Lucky Ali: Back in 2021, when news of Lucky Ali passing away started making headlines, the singer dropped a statement saying, “Hi everyone, just addressing the rumours. I’m alive and well and resting in peace at home. Haha. Hope you all are staying in and staying safe. May God protect us all during this devastating time.”

5. Divyanka Tripathi: Yeh Hai Mohabbatein actor Divyanka dismissed the death rumours by writing, “Someone’s spreading news about me being in #RIPmode. Guys I’m very much alive. Please don’t trouble my friends and family with such rumours.”

6. Fardeen Khan: Fardeen’s death became a hoax several times. Reacting to the news, Fardeen reveals it irritates him to see the irresponsibility of the news. It annoys him the most because it would give him a heart attack if his mother reads it. The No Entry actor said, “Twice it was said I had died in an accident. It pissed me off because I said if my mother saw it I think she would have a heart attack herself, or my wife knew about it or somebody else read about it so I got irritated about the irresponsibility of that aspect of it.”

7. Paresh Rawal: Paresh, at his comical best, squashed the fake death rumours with a tinge of sass and sarcasm. Sharing a report claiming that he passed away on May 14 at 7 am, Sharmaji Namkeen actor wrote, “Sorry for the misunderstanding as I slept past 7am!”

🙏…Sorry for the misunderstanding as I slept past 7am …! pic.twitter.com/3m7j8J54NF

8. Mukesh Khanna: Back in 2021, during the COVID-19 pandemic, reports were making noise that Shaktimaan star passed away. Before the matter escalates, he shared a video on FB and criticised people for spreading false news about his death. His post in Hindi translated as, “With your blessings, I am completely healthy and safe. I don’t have Covid-19 and I was not admitted to any hospital. I don’t know who created this rumour and I don’t know what is the intention of those who spread such rumours. They tamper with people’s emotions with such false news. What should be the treatment for such mentally unstable people? Who will punish their misdeeds? Enough is enough. Now it is too much. There should be a stop on such fake news.”

9. Kirron Kher: After it was reported that she was diagnosed with blood cancer, there were reports that she passed away. However, her husband and actor Anupam Kher took to Twitter to announce that they are false and Kirron is doing absolutely fine. He tweeted, “There is a rumour going around about #Kirron’s health. It is all false. She is doing absolutely fine. In fact she got her 2nd vaccination done for COVID this afternoon. I will request people not to spread such negative news. Thanks. Stay safe.”

There is a rumour going around about #Kirron’s health. It is all false. She is doing absolutely fine. In fact she got her 2nd vaccination done for COVID this afternoon. I will request people not to spread such negative news. Thanks. Stay safe. 🙏 @KirronKherBJP