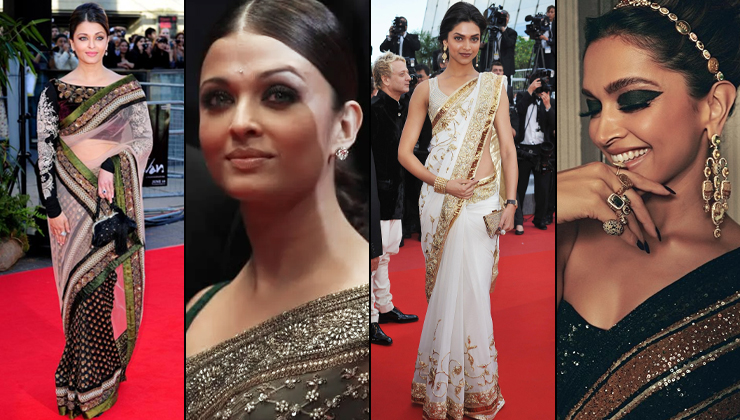 The much-awaited prestigious Cannes 2022 is here. This year India has been named the ‘country of honour’. Information and Broadcasting Minister Anurag Thakur is in France to attend the Cannes Film Festival along with a host of Bollywood celebs like R Madhavan, AR Rahman, Kamal Haasan, and Nawazuddin Siddiqui.
- Advertisement -

Deepika Padukone is not the only actress who has graced the red carpet in a saree. As you flip through Cannes’ red carpet history, you will find that many Bollywood actresses have earlier done the same. From former Miss World Aishwarya Rai Bachchan to Sonam Kapoor and many more, each has picked sarees to represent their homeland on the international stage.

As the prestigious event begins once again French Riviera, here’s a throwback to the Cannes red carpet looks of Bollywood actresses who shined in sarees.

Bollywood actresses who ruled the Cannes Red Carpet in the traditional drape:

Aishwarya Rai in saree at Cannes

The actress debuted at Cannes in the year 2002 with Shah Rukh Khan and Sanjay Leela Bhansali. This was for the premiere of her film Devdas. The actress looked bewitching in a mustard yellow saree teamed with gold jewellery. She was also seen walking the red carpet with her husband Abhishek Bachchan in 2010, the actress wore Sabyasachi Mukherjee’s sheer embroidered saree and complimented the look with smokey eyes, a shimmering bindi and a middle part back bun. The ex miss world was seen once again in a shimmery saree that was much loved by fans

Back in 2010, Deepika Padukone walked the 63rd edition of the Cannes red carpet, dressed in designer Rohit Bal’s ivory and golden saree. with a sleeveless blouse. She accessorised her look with some gold jewellery. Hair pulled up into a neat bouffant bun, brown lips and defined eyes completed her look. This year DP looked sensuous in a black and golden sequined saree from Sabyasachi. She tied her hair in a bun and complimented her looks with heavy pair of earrings and a couple of hand rings.

sonam kapoor slays in a saree at Cannes Film Festival

The actress’s first appearance at the French Riviera in 2013 was a fusion ensemble from designer Anamika Khanna. Vintage-inspired golden and white saree layered with a jacket. Her hair styled into a playful braid, ruby red lips and a Kundan nose ring completed the diva’s desi look. She next rocked the red carpet in a salmon pink Anamika Khanna fusion saree accessorised with a heavy choker and a designer clutch.

Manikarnika actress represented India twice at Cannes. The actress chooses the traditional way for her red carpet appearance. In 2018 she was seen in a sequin saree with a matching sleeveless blouse by Sabyasachi Mukherjee. Her next appearance on the Red carpet was in a gold Kanjeevaram silk saree with a strapless blouse. She had accessorised her look with a custom corset belt by designer duo Falguni and Shane Peacock and velvet gloves.

The versatile beauty was seen marking her debut at the 2013 Cannes Film Festival. She looked graceful in an olive green saree that bore gold block prints all over. The Kahani star accessorised her look with a jewelled potli that matched her burgundy blouse. Her hair pulled into a low bun with some Kohl lined eyes and statement earrings the actress won over fans with her traditional look.

Also Read: Before Katrina Kaif, pregnancy rumours about these Bollywood actresses had everyone stunned

Share
Facebook
Twitter
Pinterest
WhatsApp
Linkedin
ReddIt
Email
Tumblr
Telegram
Previous articleWhen Gulshan Grover recalled ‘demeaning’ experience in Hollywood: ‘Back in my country, I was a big star, but in the US…’ – Entrendz Showbizz
Next articleDivya Agarwal on upcoming music … – Entrendz Showbizz