HomeTelevision'I am not pregnant' says Nora Fatehi as she discusses pregnancy pains...
Television 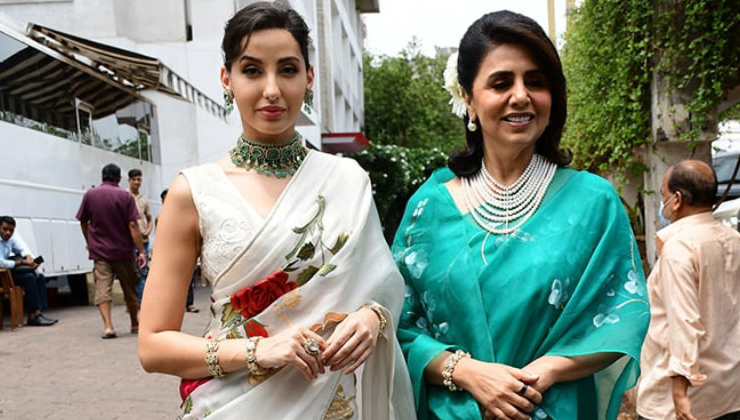 Nora Fatehi has garnered a massive fan base due to her dancing skills. The actress is also seen as a judge on the reality TV show titled Dance Deewane Juniors. JugJugg Jeeyo actor Neetu Kapoor is also a judge on the show, along with Marzi Pestonji. And Nora, Neetu Kapoor and Marzi often share behind-the-scenes videos from their fun times on the sets.

An unseen video of Nora Fatehi discussing pregnancy pains with Marzi Pestonji, Neetu Kapoor, and Terence Lewis on the sets of Dance Deewane Juniors shows has made it to the internet. During the discussion, Nora mentions she is ‘Not pregnant’.

Well, Neetu Kapoor, who is soon to be a grandmother, for the second time, was discussing pregnancy pains with Marzi, Nora and Terrance. During this incident, Fatehi was not attentive towards the discussions on the sets. To that, Marzi said, “We are discussing pregnancy pains and Nora is busy with herself.” The Bhuj: The Pride of India actress replied and shared why she was not attentive. She said, “Because I am not pregnant.” Pestonji reacted and said, “Thank You for letting the world know.”

Check out the video below:

Only recently, the Kusu Kusu fame shared a video of her from the sets of Dance Deewane Juniors. The video shows Nora getting ready for the show in her vanity van. She is wearing a beautiful pink saree and looks like an absolute stunner. The clip also features Fatehi doing a ramp walk on the stage of DDJ. She added the Jay Z song Crazy In Love as she shared the video.

Watch the video below:

Work-wise, the actress was last seen in the movie Satyameva Jayate 2. She has the film Thank God and Ek Villain Returns in her kitty.

Also Read: Nora fatehi turns director on Dirty Little Secret, a video full of symbolism that must be decoded