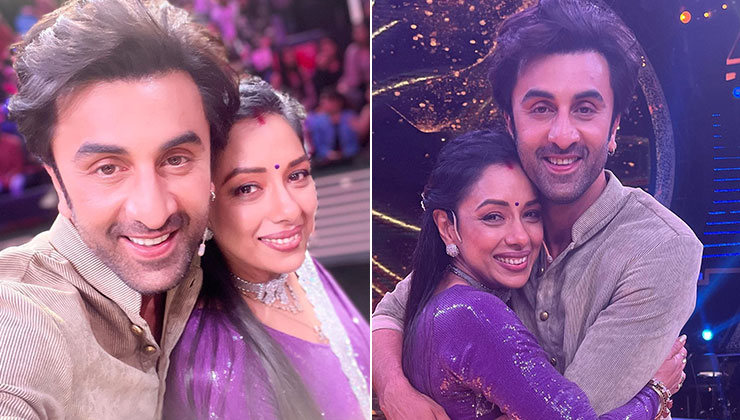 Actor Rupali Ganguly is ecstatic as she recently got the opportunity to meet actor Ranbir Kapoor. For the promotion of his upcoming movie, Shamshera, Ranbir was seen visiting the sets of Ravivaar with Star Parivaar where he had a fun segment with Anupamaa star Rupali Ganguly. In the show, she even gave him some tips on parenting which was too cute for words.

Now, after meeting him, Rupali took to her Instagram account and dropped a few pictures with Ranbir where she is seen hugging him tightly. Mentioning that her dream has come true to meet him, Rupali says that she will forever cherish this moment with the superstar.

Captioning the lovely pictures with the Sanju actor, Rupali wrote, “I LOVVVVEEEEE HIM An actor Par Excellence An extremely humble down to earth superstar A talent unparalleled My absolute favorite actor Thank You @rajan.shahi.543 for making me your Anupamaa and Thank u @starplus and #ravivaarwithstarparivaar for giving me this platform where it was truely a dream come true Anupamaa ki wajah se dheere dheere karke ek ek sapna poora ho raha hai @ashwinkverma thank u for making me make my dreams come true @vibhorratna @neha_makkar13 This is an experience I shall cherish for a lifetime An entire episode with him and a reel too THU THU THU”

Talking about Shamshera, the film is a period action drama that stars Ranbir Kapoor, Sanjay Dutt and Vaani Kapoor. Helmed by Karan Malhotra, Shamshera will release on July 22. The movie will be released in Hindi, Tamil and Telugu.